The trials and tribulations of a life of leisure...

So it has been over two years since my last confession post. A lot and very little has changed...

I had a mild heart attack at the start of March 2017. I thought it was indigestion. After being up all night I phoned the doctor in the morning. My doctor was on holiday. I decided to go to the pharmacy and got something for indigestion. That didn't work so I phoned the doctor's surgery again, said I didn't care which doctor I saw, mentioned chest pains, was told to go straight down there. As I was wired up for the ECG nurse departed to get doctor, doctor told me not to worry, an ambulance was on the way...  Long story short, I now have a stent and the tiniest scar on my wrist is all you can see. Oh - and if you want to give up smoking this is a very successful motivator!

I got the all clear at my last check up so other than keep taking the drugs all is well. I was, however, concerned about any side effects they may have been having. A couple of tweaks to lower the dosages have made a huge difference to my concentration and 'twitchiness'.

So I started word studying again last summer to test my concentration and memory. I plucked up courage to enter my first scrabble tourney in November last year - I hadn't played since the new word list came in and we are due to update again this year! I won all seven games which was a bit of a surprise to me :) I played again in February and didn't do quite so well but not a disaster either. I have now entered a couple of the Malta tourneys at the end of April...

We have a new family member. It was just over 2 years since Poncho had died, I had got myself a little fitter by walking a few miles most days after my heart attack, so we felt it was time to get another greyhound. We wanted a young girlie but Gillie (hard G), a five and a half year old boy, chose us on New Year's eve 2017. 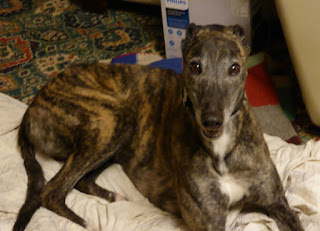 He is a real sweetheart and settled in immediately.

Other things of note:

I broke my wrist just over a year ago. I whacked my elbow (same arm) a few months later, I may never be able to scratch my back again. And I am now on more drugs for mild osteoporosis but hopeful they have found it in time to reverse it. I can live with the chalk supplements but am struggling with the once a week with a glass of water on an empty stomach no other food or drink (read coffee) for 30 minutes and no lying down one...

I am still knitting and designing (more of that in future posts maybe) although at a much steadier no stress pace.

Gardening has been limited. I hope to get back to it this year.

This is a testimony that I will tell everyone in the world. i have been married for 4 years and on the fifth year of my marriage, another woman had a spell to take my lover away from me and my husband left me and the kids and we have suffered for 2 years until i meant a post where this man Zuma Zuk have helped someone and i decided to give him a try to help me bring my love Husband home and believe me i just send my picture to him and that of my husband and after 48 hours as he have told me after doing everything he asked me to do, i saw a car drove into the house and behold it was my husband and he have come to me and the kids and that is why i am happy to make everyone of you in similar case to meet with this man and have your marriage fixed His email: spiritualherbalisthealing@gmail.com whatsapp him on this +15068001647..... thank so much Zuma Zuk.